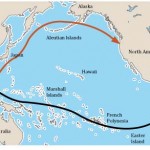 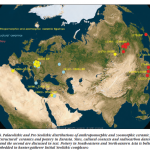 People are discovering antique fishing tackle all the time, in closets and at garage sales, but none of that compares to discoveries made recently by archaeologists at two of the Channel Islands off Southern California.

Looking for signs of ancient human settlement, they unearthed meticulously-crafted spearheads and other tools (see photo at right) that date back 12,000 years and provide insight into the lives of a seafaring culture that obtained bounty from the ocean.

The astonishing discoveries, at three sites on Santa Rosa and San Miguel islands west of Santa Barbara, strongly support the theory that during an era when the first traces of humans appeared in the archaeological record in North America, a coastal culture existed that was distinct from the well-chronicled inland Clovis culture, which consisted of big-game hunters who subsisted on mastodons and other large mammals.

A 15-member team led by Jon Erlandson of the University of Oregon’s Museum of Natural and Cultural History found chipped stone tools, used for fishing and hunting, along with an abundance of discarded seashells and bones.

A story about the finds appears in the March 4 issue of Science; it was summarized by New Scientist and Science Daily. New Scientist’s headline: “Found: fine American fishing tackle, 12 millennia old.”

In the Science Daily piece, Erlandson said, “This is among the earliest evidence of seafaring and maritime adaptations in the Americas, and another extension of the diversity of Paleoindian economies. The points we are finding are extraordinary, the workmanship amazing. They are ultra thin, serrated and have incredible barbs on them. It’s a very sophisticated chipped-stone technology.”

The sites are thought to have represented seasonal hunting grounds. Prey items probably included surf perch and rockfish, geese, cormorants and other birds, shellfish and perhaps seals, sea lions and otters. The crescent-shaped stones probably were used at the ends of darts to stun birds. Fish and larger marine mammals were speared.

Team member Todd Braje, of Humboldt State University, is quoted by New Scientist as saying, “We found very thin, expertly made projectile points and it blew us away that these delicate flint-knapped points are this old.”

Most of the tools were different from those unearthed at inland Clovis sites on the North American mainland, but some of the spearheads were similar, perhaps implying that trade existed between the cultures.

Erlandson explained that his team’s find supports the notion that mariners were either first to inhabit North America, or that they arrived at about the same time as those via the land route.

While the recent finds are not the oldest in North America, Braje explained in the New Scientist story that “this pushes back the chronology of New World seafaring to 12,000, maybe 13,000 years ago. It gets us a big step closer to showing that a coastal migration route happened, or was at least possible.”

— Top image is of the ancient fishing tackle discovered recently by scientists at Santa Rosa and San Miguel islands off Southern California. Courtesy of Jon Erlandson. Second image, of Santa Miguel Island, and Channel Islands map graphic are from Wikipedia

–It really does seem that there were people sailing all around the rim of the Pacific before the Clovis peoples settled along a more Easterly route. Apparently they had settlements from Indonesia to Chile all along the way, and that there must also have been regular two-way traffic across the Pacific at least as early as 11000 to 12000 BC.

It also seems that Pottery has been definitely established as an invention in Lemuria or Sundaland, at least as early as 15000 BC and only subsequently travelling Northward to Japan and far-Eastern Siberia, and then again to Africa by way of Ethiopia, on to the southern Sahara by 10000 BC once again.