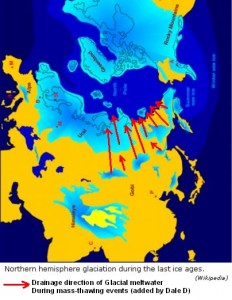 This information is from an older posting at my Yahoo group, Kon-Tiki and Mu, but it is of especial interest to James Churchward readers and critics. James Churchward had  stated that the Uighir Empire once existed in Central Asia and was overwhelmed about 16000 BC by waves up from the south: he said that when he was in Siberia he saw debris left by the waves, and that the debris had been laid down in water but not by ice (Glaciers)

It just so happens that much of the information actually checks out, but not oficially because of the reasons Churchward stated. 16000 BC or 18000 years ago was about the time of the Glacial Maximum and large mountain glaciers lay in the South of Siberia. It just so happens the highlands of Siberia are mostly in the South and the land slopes mostly toward the Arctic ocean from there. So at the end of the Glacial Maximum, large quantities of meltwater came from out of the South of Siberia as the mountain glaciers meletd way: Graham Hancock’s book Underworld (2002) notes a sudden influx of glacial meltwater at about 16000 to 14000 years ago as the first of three “Global Superfloods”, each of the three being derived from the melting of the continental glaciers, in stages.

Churchward’s version says that there were no high mountains of Central Asia at the time and the waves washed full across the breadth of Asia. According to the Geologists, the mountains were already there and in fact that is where the floodwaters originated. Hoever, at least it can be said that Churchward turned out to be approximately correct as to the nature of the deposits in Siberia, the direction that the waves were coming from and the fact that there was no ice involved directly in it, and the approximate date of the deposit. Any one of these observations would be noteworthy on its own.